Inspiration for the StealthBox Intake came from internal discussions about what we wanted from an intake system for the 2015+ WRX. Of course, performance is the highest priority, but at GrimmSpeed so much more than that goes into a product. We wanted an intake that purred quietly under normal driving circumstances but would roar at wide-open throttle.

We wanted an intake that looked at home in the well-sported 2015+ WRX engine bay instead of a shoebox stuffed into the fender area. From here, the SteathBox was born. We took the concept one step further and referenced the F-117 Nighthawk as inspiration for the stealthy look of the GrimmSpeed heat shield. It should come as no surprise that the performance it packs is equally unique.

MAF diameter and placement, total bend angle, filter location, and heat shield design were the primary variables during the design phase. To ensure accurate readings, unaffected by the intense heat of the engine bay, MAF sensor placement absolutely must be within the heat shield. To minimize restriction, it was important to keep the total bend angle in the intake tube as low as possible, but still raise the filter location away from the ground to protect it from the elements. Lastly, testing showed the importance of utilizing the factory ram air scoop to feed the otherwise stagnant air in front of the fender. 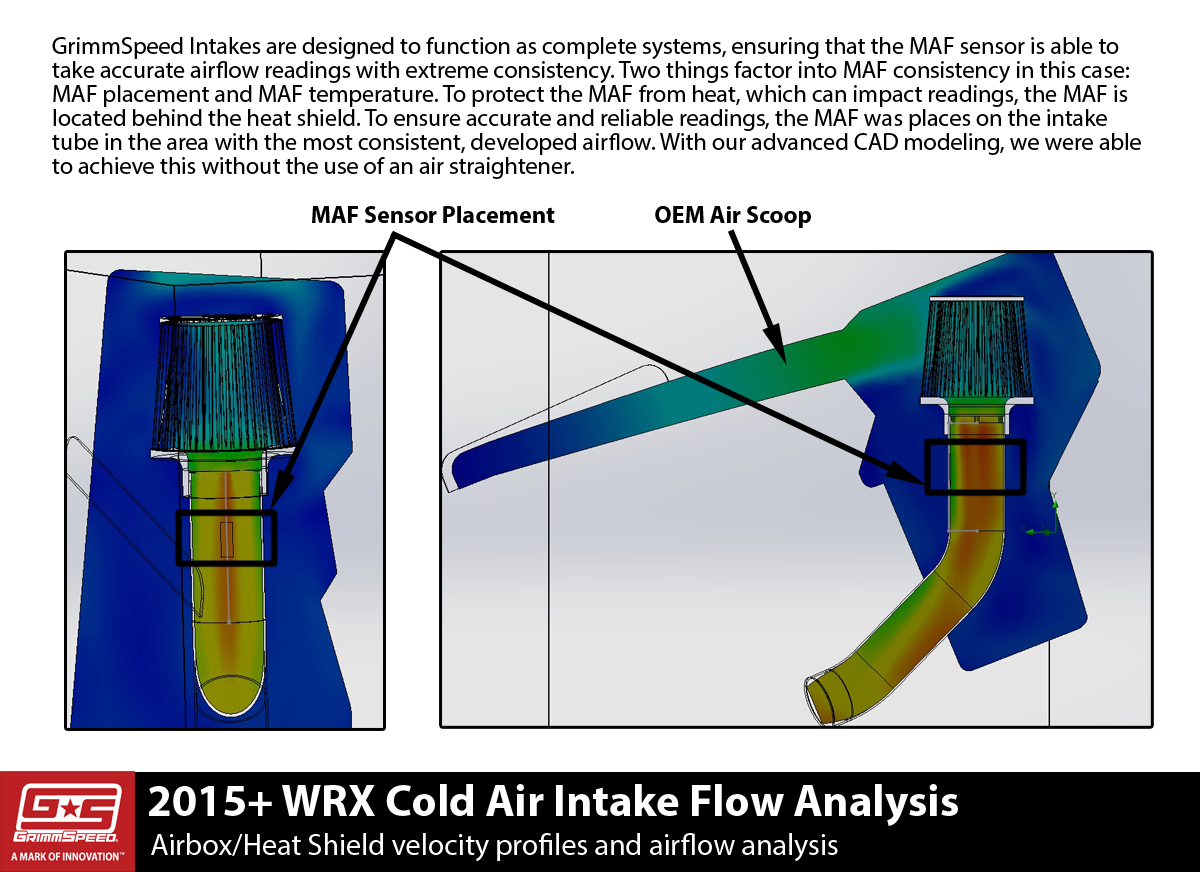 Our engineers created a 3D model of the intake system and fender area in order to optimize each of these variables. The result is an intake with a total bend angle of 74 degrees, and a filter that is placed neatly within the fender, such that it offers protection from the elements without being unnecessarily exposed to the heat of the engine bay. Lastly, the shape of the heat shield follows that of the factory air scoop, feeds the filter with fresh air evenly, and promotes swirl which prevents pockets of motionless air on the cold side of the shield.

We have made the decision not to sell the intake without the heat shield. It seems that others have done this to hit a lower price point at the cost of performance. We'd prefer that everybody using a GrimmSpeed StealthBox Intake have the best possible experience and the use of the heat shield is critical to the function of the intake system.

Each intake begins with a CNC bent and laser cut 6061 Aluminum tube. Contrary to popular belief, particularly from those producing composite intakes, we found that the increased thermal mass of using thicker aluminum tubing (1/8” wall thickness) kept the intake from being vulnerable to rapid temperature change. This is called the ‘thermal flywheel effect’ and will keep the rapidly fluctuating temperatures inside your engine bay from affecting intake temps as drastically.

Custom MAF flanges are machined from the same 6061 alloys and are placed on the straight nearest the filter, where we observed the most consistent cross-sectional flow. Mounting brackets are laser cut from a 3/16” thick aluminum plate and CNC bent for perfect and repeatable fitment. Finally, heat shields are laser cut, CNC bent, and hand-assembled before going to powder coating for a durable wrinkle black finish.

Dyno testing and long-term road testing are where all of this theory meets reality. Knowing that the same application of these design techniques resulted in intakes that performed extremely well on both the BRZ/FR-S and the 08-14 WRX/STI, we were confident in our chosen configuration. Dyno testing and tuning verified the intake's ability to make power and 6mos of road testing through winter/spring in Minnesota confirmed real-world performance.

We chose to use the exact same pull that tested the performance of our J-Pipe/Downpipe as the baseline for our 2015 WRX. This proves that our baseline is not somehow artificially low. We then installed the intake and had the car returned using the same boost levels and air-fuel ratios (AFRs).

This is an extremely important part of evaluating an intake system. If the before and after results aren’t showing the same boost levels or AFRs, performance increases can be attributed to tuning rather than to the performance of the intake hardware itself. The chart below shows the before and after just described with both boost and AFR plotted along with whp and wtq. It should be noted that the stock baseline for this car was 174whp, so this particular dyno reads very low.

Be the first to know about new collections and exclusive offers.